Myth: "Eye for an eye": Revenge is allowed in Biblical law 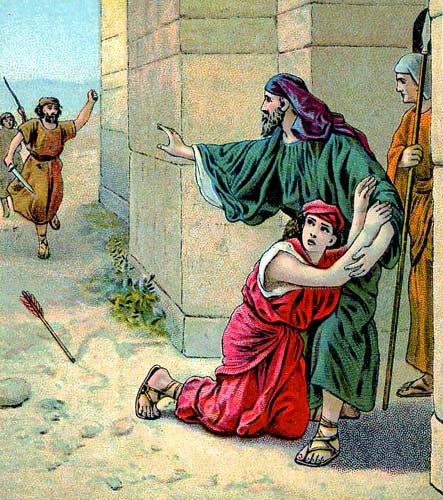 Recently, I heard a Christian friend say (something like): "People were allowed to avenge the deaths of their relatives under Biblical law." Is this statement true, or is it an example of Christian ignorance of Biblical law?

A related statement that I have often heard Christians make is something like the following:

In the Sermon on the Mount, Jesus said, "You have heard that it was said: an eye for an eye and a tooth for a tooth, but I say to you, not to resist the evil." [Matt. 5:38-39] See, Jesus was quoting from Biblical law, which allowed for proportional revenge, and he was teaching against that. He showed us that this part of Biblical law is no longer relevant, because revenge is not allowed in the New Covenant.

These statements are both examples of the rank ignorance that you find today among Christians who have been taught falsehoods by their pastor or some other equally ignorant teacher.

Let's deal with the last myth first. Jesus, in the Sermon on the Mount, was not teaching against any part of Biblical law. He stated right in the introduction to his teaching that he was upholding every jot and tittle of the law:

Do not think that I came to abolish the law or the prophets. I did not come to abolish, but to fulfill. For truly, I tell you, until heaven and earth pass away, not even one jot [smallest letter] or one tittle [a tiny pen stroke] shall in any way pass away from the law, until all things are accomplished. Whoever, therefore, shall break one of these least commandments, and teach others to do so, shall be called least in the Kingdom of Heaven... (Matt. 5:17-19)

Jesus made the above statement less than twenty verses before his statement about "an eye for an eye." If Jesus was about to teach people to "break one of the least commandments," then he would be a pretty big hypocrite, wouldn't he? Further, if you make the claim that any part of the Sermon on the Mount somehow contradicts Biblical law, then you are saying that Jesus was a hypocrite. If you have ever taught anything like this, then you'd better repent now, because you've been engaging in false teaching.

What is Jesus referring to, when he references the "eye for an eye" teaching?

He is talking about the teaching of the Pharisees, who (as usual) were applying Biblical law in the wrong situations. "Eye for an eye" is certainly an instruction in Biblical law: it is from Exodus 21:24 (also Lev. 24:18-20, Deut. 19:16-21). But what is the context? It was specifically given as a restriction on civil judicial penalties. In other words, any judge who was called upon to decide a case was not allowed to order any penalty that was greater than the original harm done. It is a principle of proportionality, but only applies to the civil judge, who commands the coercive power of civil government.

The Pharisees were misusing this law, teaching people that it allowed a victim to exact retribution themselves (as long as it was proportionate). Notice how similar this false teaching is to the first statement I quoted above? Christian teaching about Biblical law has now become as bad as the Pharisees.

Of course people were never allowed to take their own revenge (proportionate or otherwise) in Biblical law. In fact, the law explicitly teaches against revenge:

You shall not take vengeance, nor bear any grudge against the children of your people; but you shall love your neighbor as yourself. (Lev. 19:18)

Don't seek revenge yourselves, beloved, but give place to God's wrath. For it is written, "Vengeance belongs to me; I will repay, says the Lord." (Romans 12:19)

notice that he is quoting from the Hebrew Scriptures: specifically, Deuteronomy 32:35. Biblical law always reserved the right of vengeance to God or his representatives in civil government, not to private individuals. This is why Paul can go on, just six verses later, to say:

[The civil ruler] is a servant of God to you for good. But if you do that which is evil, be afraid, for he doesn't bear the sword in vain; for he is a minister of God, an avenger for wrath to him who does evil. (Romans 13:4, emphasis added)

Acts of retributive justice (i.e. God's "vengeance"/wrath) are denied to private citizens (Rom. 12:19, Lev. 19:18), but are allowed (only) to those exercising the authority of God which He grants to the civil government (Rom. 13:4) acting as His servant. This is why "eye for an eye" can only be read as a restriction (or allowance) upon the civil government.

Modern Christian teachers, however, have tried to separate civil government from God's law. "Oh no," they say, "you can't mix religion with politics, because there must be a separation of church and state." This is a logical non-sequitur. What they really mean is: "we can't say anything about politics and civil government, because we signed an agreement with the civil government to limit our speech in order to get our 501c3 tax-exempt status."

They clearly prefer man's laws (all 500,000+ of them) to God's law. This is why they have lost the ability to teach God's law properly and to make the proper Biblical distinctions. Just like the Pharisees. Beware the leaven of the 501c3 tax-exempt Christian teachers. The more they disrespect God's law and King, the greater will be their judgement.

The Redeemer of Blood and the Cities of Refuge

In honor/shame cultures (as opposed to Christian culture), it is common for blood feuds to develop between tribes or families. Men will get into a fight over some perceived insult, and one of the men will prevail and (perhaps accidentally) kill or maim the other. Rather than follow God's just law of judge-mediated retribution and restitution (e.g. Exod. 21:18-27) -- the slain man's relations will escalate the conflict into series of revenge killings. "You kill one of my family, and I'll kill two of yours." This was the perverse culture of Israel's sons, who slew all the men of Shehem because one man defiled their sister Dinah (Gen. 34:13-24).

This is not the culture promoted by Biblical law. Honor/revenge is the culture that Biblical law protects against. God's law recognizes that men will often want to "take justice into their own hands" and seek revenge. This is why God's law created the "cities of refuge." In the time of the Israelites, cities were fortified locations where you would expect to find armed men. Not "police", of course, just ordinary citizens who were prepared to defend themselves and their families. Just like the ones Nehemiah mentioned in Neh. 4:14:

I looked, and rose up, and said to the freemen, and to the captains, and to the rest of the people, "Don't be afraid of them: remember the Lord, who is great and awesome, and fight for your brothers, your sons, and your daughters, your wives, and your houses."

Back then, cities were not places of increased danger, the way they are in modern cultures which have abandoned God's law. They were places of increased protection. Someone who was being pursued by a vigilante could come to a city of refuge for protection and expect an impartial hearing before a judge (or multiple judges in the form of a jury: see Num.35:24-25), who would listen to any witnesses presented by both sides of the dispute (Num. 35:30), assess the truthfulness of the various witnesses, and then make a just determination of the guilt or innocence of the alleged evildoer (Num. 35:11-12, 24-25, Deut. 19:15, 17:6).

If the accused were innocent of murder, they would be protected in the city from anyone seeking vengeance (Num. 35:25). If they were determined to be guilty, they were released to the actual witnesses of the crime, who would then execute the judge-ordered punishment: Num. 35:19. Some Biblical interpreters get confused because the scripture uses the same phrase -- "redeemer of blood" [Hebrew:  גֹּאֵ֣ל הַדָּ֔ם ] -- for a righteous witness to the crime (e.g. Num. 35:19) as for a vigilante relative (Deut. 19:6). But God's law never endorses personal revenge. Witnesses are always required to establish truth (Num. 35:30, Deut. 19:15, 17:6), and those witnesses are required to throw the first stone (Deut. 13:9, Deut. 17:7). Often, the "redeemer of blood," being a relative of the one killed, would also have been in a position to witness the actual killing, which is why the term is used for the righteous witness in the case law described in Num. 35:19.

Personal revenge is not allowed in the New Covenant, because it was never allowed under the Old Covenant. Jesus didn't change Biblical law on this issue, because it was perfectly just already. More just, in fact, than our law systems today, which: