The "hard sayings" of scripture are often the ones that we learn the most from. They break us out of our cultural preconceptions. They cause us to see the world through a different value-system. Since Biblical law is the written reflection of God's character, "hard sayings in Biblical law" are the ones that can teach us the most about God's character. It is God's value-system that we must internalize, throwing out anything in our own value-system which conflicts. 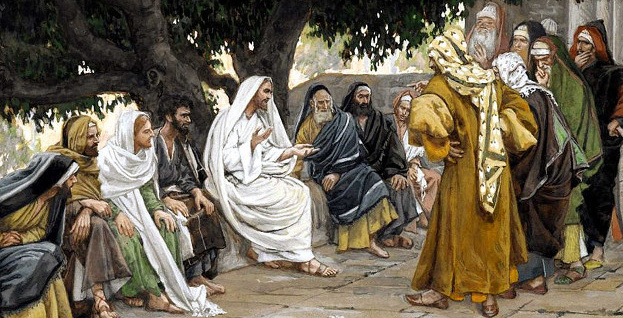 We begin with Matthew 15, where the scribes (who were the "law-experts" of the first century) had traveled from Jerusalem to Gennesaret (a region near Galilee). This shows how significantly they treated Jesus. No scribe is going to leave Jerusalem to go nit-pick your average street-preacher. This would be like a New York lawyer traveling to Smalltown, USA. They obviously considered Jesus a threat.

Of course Jesus and his disciples were aware of them (big-city lawyers do not sneak around in a place like Gennesaret). As usual, Jesus was doing things that would deliberately provoke a confrontation with the religious leaders. Previously, it was picking grain (Matt. 12:2), and healing (Matt. 12:13), on the Sabbath. Now, they were defying the "tradition of the elders":

“Why do your disciples transgress the tradition of the elders? For they don't wash their hands when they eat bread.”

Of course, there is no Biblical law which requires a person to wash their hands before eating. This was a rule made up by the Pharisees, and Jesus was intentionally allowing his disciples to break it. Jesus answered:

“Why do you also disobey the commandment of God because of your tradition? For God commanded, 'Honor your father and your mother,' and, 'He who speaks evil of father or mother, let him be put to death.'”

Do you see what Jesus just did? He quoted two commands from the Hebrew Scriptures: the fifth commandment (Exodus 20:12) and another commandment in which God ordered the death penalty for breaking the fifth commandment in a particular way (cursing one's father or mother, Leviticus 20:9). [There is also a separate death penalty for striking one's father or mother: Paul referred favorably to this in 1 Tim. 1:9.]

Let's just bracket out what Jesus says next about "Corban." You can read about this in any commentary and get a good explanation. Basically, Jesus is pointing out a tradition which the Pharisees teach (and the scribes approved), that breaks God's law by allowing people to dishonor their parents. What better way to confront lawyers, than to tell them they are breaking the law!  Jesus says:

“You have made the commandment of God void because of your tradition. You hypocrites! Well did Isaiah prophesy of you, ...”

“Do not think that I came to abolish the law or the prophets. I did not come to abolish, but to fulfill. For truly, I tell you, until heaven and earth pass away, not even one smallest letter or one tiny pen stroke shall in any way pass away from the law, until all things are accomplished. Whoever, therefore, shall break one of these least commandments, and teach others to do so, shall be called least in the Kingdom of Heaven...” — Matt 5:17-19

In the current exchange with the scribes and Pharisees, Jesus had just quoted from God's commandments (including the death penalty commandment) in order to show that the Pharisees were "making void" God's command by their tradition.

So here's the question: If (as many Christians teach) Jesus actually came to abolish the death penalty for cursing one's parents, wouldn't Jesus be the hypocrite, and not the Pharisees?

A sermon which you will never hear

You may never in your lifetime hear a sermon on this exchange that Jesus had with the scribes and Pharisees, which talks about Jesus supporting this death penalty. You might hear plenty of sermons on Jesus and the woman taken in adultery (from John 8), because that passage is easier for antinomians to pervert. But you cannot treat Matthew 15:3-6 that way, you can only gloss over it.

Here's why you should never gloss over it.

God gave us the fifth commandment ("honor your father and mother") to uphold the institution of the family, which is the foundational cultural institution of human civilization. As Paul says, it is the first (though not the last) commandment with a promise: "'That it may be well with you, and you may be a long time upon the land.'" (Eph. 6:3).

God attaches civil penalties to only a small number of His commandments. A civil death penalty, tied to a commandment, shows how important it is not to break it.

For example, in Biblical law, if you accidentally (or even on purpose, because you were starving) ate an animal that was ceremonially "unclean," you would have to wash your clothes, and you would be ceremonially "unclean" until evening (Leviticus 11:40). That's all. And there was no civil enforcement of this penalty.

If you stole someone's sheep, and were caught, you would have to pay them back four sheep (Exodus 22:1). Compare this with British Common Law, for example: under Common Law, stealing a sheep (classified as "felony theft") got you the death penalty. In Biblical law, there is no such thing as "felony theft": economic crimes never merit the death penalty. They are always resolved by restitution to the injured party (not the civil government).

Then there is a category of crimes which are so threatening to social order and civilization that God ordered humans to deal with them using the ultimate penalty: death. Murder, rape, adultery, kidnapping, bearing false witness in a capital trial, and others. One of these others was cursing one's father or mother: Exodus 21:17. Another was striking one's father or mother: Exodus 21:15.

Instances of these crimes which were witnessed by at least two people (and in which the two witnesses stepped forward to testify, were cross-examined, and found to be truthful) would require the judge to order the death penalty. Does this mean that it happened very often? Probably not, but the Israelites' inconsistency in implementing the law is entirely irrelevant to the justice of the penalty.  If you have a problem with the penalty, then you, personally, have a problem with both God's character and Jesus (who was the incarnation of God's character).

God values the integrity of the family and respect for parental authority so much that He made these violations of the family equivalent to murder. If you think that the death penalty for striking or cursing one's parents is "too harsh," then you are showing that your value system is not like God's value system. Nor is it like Jesus' value system, because he quoted this command with approval.

A lot of Christians want to get around the uncomfortable implications of these civil death penalties, so they claim that these were "maximum penalties" only, and that judges had the "discretion" to reduce the penalty. Although there is nothing in the text that gives any judge "discretion" to reduce these death penalties, Christians will try to argue otherwise. Let's examine a typical argument for the "discretionary" power of the judge:

Judges were to weigh the circumstances of each offense and consider the offender’s hard-heartedness before wisely applying the standards of the Mosaic law. The law’s structure confirms this. For example, Numbers 15:32–36 records the case of a man who gathered wood on the Sabbath. God had earlier revealed death as the penalty for Sabbath-breaking (Ex. 31:14), but the people still asked the Lord what to do. If judges had to execute all Sabbath-breakers, the inquiry would have been unnecessary. From the hesitation to apply the death penalty without further revelation, we may infer that Israelite judges could sometimes impose a penalty besides death for Sabbath-breaking.

So the above interpreter believes that we can "infer" from Moses' "hesitation", that Moses the judge had the discretionary power to impose a lesser penalty?

Actually, the sufficient explanation for Moses' hesitation in this case (and in the blasphemy case: Lev. 24:10-16) is that God had specified the death penalty, but not what kind of death-penalty. Moses asked for clarification, and God answered: stone him. This may be uncomfortable for modern Christians, but it isn't complicated.

Discretionary power on the part of judges is a characteristic of pagan law, not God's law. Any time you give a judge the power to set variable penalties, you get abuse of power by the judge.  "Judicial discretion" means that if a man were witnessed (by two people) in a clear act of rape, the judge could decide that 30 days confinement would be sufficient punishment.  That's what we have today under our pagan-influenced law systems.  That's the sort of civil government abuse that Biblical law was designed to prevent.

Under Biblical law, witnesses (not a "prosecutor") control whether a prosecution even takes place. No witnesses, no prosecution, no "fishing for evidence." The judge, if she is doing her job, merely brings in evidence or other witnesses to support or falsify the initial criminal complaint. Jesus actually gave us a pattern for how a judge should act, when he was presented with the woman taken in adultery (in John 8): No just witnesses, no prosecution, just as the law said (Deut. 19:15ff).

And that's the sermon on Matt. 15 which you will probably never hear any modern Christian pastor give. Which explains a lot about the state of the church and Christian families today.

How did Jesus "fulfill" the Law? (Matt. 5:17-19)
Questions you should ask your pastor/elder
What is the just penalty for murder?
Didn't Jesus say that only "sinless" people could judge others?
Religion is culture internalized