I recently saw (on a social media site) an exchange between two people talking about Biblical law. One person was (sort of) promoting it, and the other person responded (something like) "so you think people should be stoned for wearing mixed fabrics?" 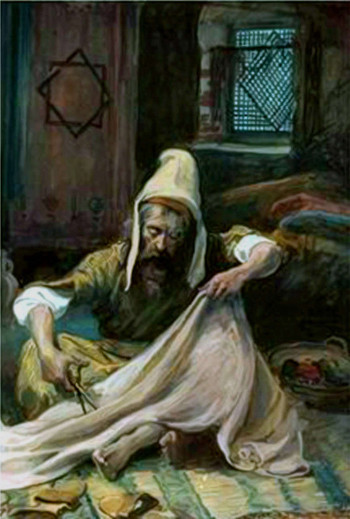 Apparently there are people out there who have been convinced that Biblical law contains a death penalty for wearing the wrong type of clothing.  Of course this is false, but most people have false beliefs about Biblical law, so that is nothing new. The interesting (and tragic) thing is that there seemed to be no Christians (or even Jews) willing or able to correct this falsehood.  I'll bet that if I took a poll of the Christians that I know, more than half would be willing to believe that Biblical law contained a death penalty for wearing mixed fabrics.

No, there is no death penalty for wearing the wrong clothing in Biblical law. There is actually no law against wearing mixed fabrics (although some Jews have interpreted it that way).  In two places (Lev.19:19 and Deut.22:11) there is a law against wearing shaatnez, which is a specific combination fabric of linen (made of flax) and wool.  This probably had to do with a particular pagan practice of the time, from which God wanted to separate His people.  We just don't know for sure now.  No other fabric combinations are prohibited, but some Jewish legal interpretations have wrongly carried this beyond the face value interpretation.

So if you wore something that was a combination of linen (made from flax) and wool, you would be violating this law.  There is no civil penalty for doing this. I believe this was one of the Jew/Gentile separation laws which passed away with the New Covenant.  But even if it were still in effect, there is no civil government enforcement of this law authorized in scripture.   For Christians this is clearly a conscience issue.  It is not an excommunicable offense.

Someone who is rebelling against God's law/character will find plenty of things in Biblical law that seem harsh or unreasonable (to them).  But we Christians should know enough about our King's law to correct the falsehoods when we hear them.

What is the just penalty for murder?
Didn't Jesus say that only "sinless" people could judge others?
Did Jesus really support the death penalty for cursing one's parents?